It is a 700-verse Hindu scripture that is part of the Mahabharata epic.

The Bhagavad Gita is considered to be a philosophical and spiritual classic. The text is believed to have been written approximately 2500 years ago, and it is thought to have been based on an older oral tradition.

The text is a dialogue between the Hindu god Krishna and the warrior Arjuna. In the text, Krishna provides Arjuna with spiritual teachings and guidance.

It covers a range of topics including self-realization, the nature of the soul, and the path to liberation.

The Bhagavad Gita is one of the most popular and important texts in Hinduism, and it has been quoted and referenced by spiritual teachers and thinkers from all across the world.

This book is all about introspection. It is designed to help you learn more about yourself and how you can become a better person.

The verses of Bhagavad Gita are said to have been spoken by Krishna, a divine incarnation of Vishnu, to Arjuna, a warrior on the battlefield.

The teachings in the Bhagavad Gita emphasize the importance of detachment, self-reflection, and action in the world.

One of the most famous verses from the Gita is:

On the field of battle,

With your heart open to God,

And your mind focused on your goal.”

This verse teaches that in order to achieve victory in battle, and in life, we must be focused and have our hearts open to God.

The Bhagavad Gita quotes are words of wisdom and can be applied to anyone, no matter what their religion is.

Also Read: 100+ Powerful Karma Quotes that will Empower your Life! 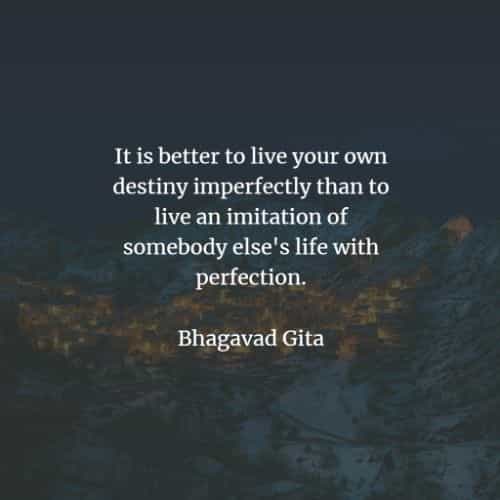 Here are some of the best Bhagavad Gita quotes:

“Perform your obligatory duty, because an action is indeed better than inaction.”

“No one who does good work will ever come to a bad end, either here or in the world to come.”

“There is nothing lost or wasted in this life.”

“The power of God is with you at all times; through the activities of mind, senses, breathing, and emotions; and is constantly doing all the work using you as a mere instrument.”

“He who is deluded by the ego thinks, I am the doer.”

“Curving back within myself I create again and again.”

“If you fail to achieve your goal, change the strategy, not the goal”

“Whatever action is performed by a great man, common men follow in his footsteps, and whatever standards he sets by exemplary acts, all the world pursues.”

“You have the right to work, but never to the fruit of the work. You should never engage in action for the sake of Reward, nor should you long for Inaction.”

“The wise man lets go of all results, whether good or bad, and is focused on the action alone.”

“Work for work’s sake, not for yourself. Act but do not be attached to your actions. Be in the world, but not of it.”

“Change is the law of the universe. You can be a millionaire or a pauper in an instant.”

“Man is made by his belief. As he believes, so he is!”

“Lust, Anger, and Greed are the three doors to hell.”

“Neither in this world nor elsewhere is there any happiness in store for him who always doubts.” “Through selfless service, you will always be fruitful and find the fulfillment of your desires”

“Those who are motivated only by desire for the fruits of action are miserable, for they are constantly anxious about the results of what they do.”

“It is better to live your own destiny imperfectly than to live an imitation of somebody else’s life with perfection.”

“As a person puts on new garments, giving up old ones, similarly, the soul accepts new material bodies, giving up the old and useless ones.”

“The nonpermanent appearance of happiness and distress, and their disappearance in due course, are like the appearance and disappearance of winter and summer seasons.They arise from sense perception,and one must learn to tolerate them without being disturbed.”

“When you feel the suffering of every living thing in your own heart that is consciousness.”

“In the dark night of all beings awake to Light the tranquil man. But what is day to other beings is a night for the sage who sees.”

“Seek refuge in the attitude of detachment and you will amass the wealth of spiritual awareness. The one who is motivated only by the desire for the fruits of their action, and anxious about the results, is miserable indeed.”

“Greed is nothing but intensified desire, while anger is frustrated desire”

“For the senses wander, and when one lets the mind follow them, it carries wisdom away like a windblown ship on the waters.”

“As a kindled fire reduces wood to ashes, so does the fire knowledge burn all reactions from material activities to ashes.”

“The effort never goes waste, and there is no failure. Even a little effort toward spiritual awareness will protect you from the greatest fear.”

“We are kept from our goal not by obstacles but by a clear path to a lesser goal.”

“Negativity around is not the problem. The problem is when that negativity gets inside you.”

The senses, mind, and intellect are said to be breeding grounds of desire. Through them, desire clouds one’s knowledge and deludes the embodied soul.

“Be steadfast in the performance of your duty, Abandoning attachment to success and failure. Such equanimity is called Yog.”

“The wise grieve neither for the living nor the dead. There was never a time when you and I and all the kings gathered here have not existed and nor will there be a time when we will cease to exist.”

“Through selfless service, you will always be fruitful and find the fulfilment of your desires.”

“The knowledge of even the most discerning gets covered by this perpetual enemy in the form of insatiable desire, Which is never satisfied and burns like fire.”

“Feelings of heat and cold, pleasure and pain, are caused by the contact of the senses with their objects. They come and they go, never lasting long. You must accept them.”

“It is lust alone that is born of contact with the mode of passion, and later transformed into anger. Know this as the sinful, All devouring enemy in the world.”

“One has to learn tolerance in the face of dualities such as happiness and stress, warmth and cold and by tolerating such dualities become free from anxieties regarding gain or loss.”

“Performing the duty prescribed by (one’s own) nature, one incurreth no sin.”

“Neither in this world nor elsewhere is there any happiness in store for him who always doubts.”

“One who sees inaction in action, and action in inaction, is intelligent among men.”

The key to happiness is the reduction of desires.

Happiness is a state of mind, that has nothing to do with the external world

“Left to itself, the mind goes on repeating the same old habitual patterns of personality. By training the mind, however, anyone can learn to step in and change old ways of thinking; that is the central principle of yoga:”

“Fear not. What is not real, never was and never will be. What is real, always was and cannot be destroyed”

“Sinful actions do not affect those who fulfil their duties with no attachment, yielding the outcomes to the Supreme Lord, like a lotus that is unaffected by mud.”

“Those whose faith is deep and who have practised controlling their mind and senses attain divine knowledge. Through such transcendental knowledge, They quickly attain everlasting supreme peace.”

“One who neither rejoices nor grieves, who neither laments nor desires, and who renounces both auspicious and inauspicious things — such a devotee is very dear to Me.”

“If life is to live freely, then the thoughts filled in mind will have to be empty”

The aim is what gives Karma its meaning. What important is the motivation behind the deed? Those who are motivated solely by a desire for the fruits of activity are unhappy because they are continuously concerned about the outcomes of their actions.”

Let a man raise himself by his own efforts. let him not degrade himself. because a person’s best friend or his worse enemy is none other than his own self.

“If you want to see the brave and bold, look to those who can return love for hatred.”

The Bhagavad Gita is a scripture that is full of inspiring quotes and verses. If you need a little encouragement and motivation in your life, read through some of these verses and let their wisdom inspire you.

Do not forget to share your favourite Bhagavad Gita Quotes. Let us all be inspired by the wisdom of this ancient text!

Teachings of the Bhagavad Gita

The Hidden Truths in the Bhagavad Gita